Arrival at the Range

I arrived at the range around 9:30 am on Monday, a day early. It is nice to have a day to help set the flags up, organize my loading area, mark the benches that I was going to shoot on, and visit with other shooters who I have not seen since last year’s nationals. Craig Nagel from Wisconsin was nice enough to let me load in his covered trailer. Many others loaded under a huge tent that was set up especially for this tournament.

After all the necessary prep work and catching up was done, I took the 15-minute drive to Webster City to check into the motel. I was hoping for a good night’s sleep before the competition started the next day.

My cell phone did the duck quack alarm at 5:45 am Tuesday. After a shower and breakfast, I was heading to the range around 6:30. Of course, there was more visiting that had to happen early on, but since I was shooting on relay number one, I was able to set my equipment up on the bench around 8:00 am to get ready for the 9:00 start time. 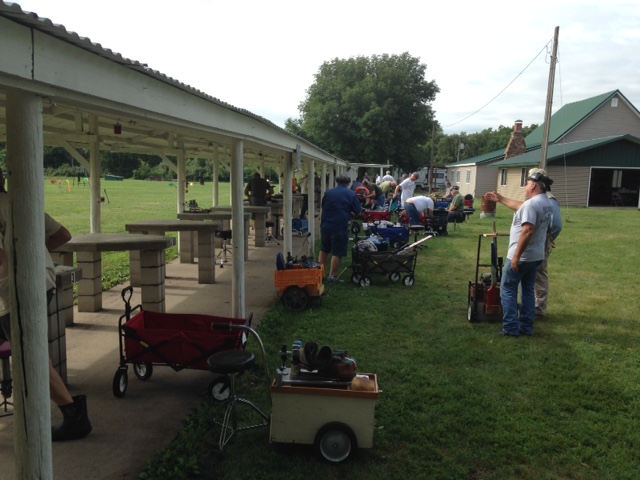 Picture of the Line with different carts

Right on schedule, Match Director Ronnie Berg called relay one to the line at 9:00 am. The first match of the day is always a warm-up match. This match does not count towards our score. It is simply to make sure we are “on paper” and give the shooters a chance to figure out which condition (mirage, wind angle, and speed) we want to shoot in. After the warm-up match, all competitors have to take everything off of their bench to make room for the next relay’s shooters. Most competitors have range carts that we put our equipment in then wheel that equipment to the next bench.

There were three relays at this year’s Nationals with a four bench rotation between each relay. Meaning, if I was on bench three for one relay, I would move four benches to bench number seven for the next relay. The reason for this is to give each shooter an opportunity to shoot at different parts of the range. Some parts of the range are more forgiving than others and it is a way to “equal the playing field” in terms of bench locations. Myself at the bench Photo taken by Randy Robinett

My physical process stayed the same all four days. I would shoot the warm-up, take my equipment off the bench, wheel it to my next bench, and go to the trailer and load my cases for the next match. Since I was shooting on relay number one, I would load during relay number two. Once relay three started shooting, I would go sit behind my upcoming bench to see if the previous condition I had shot in had changed. If it did, I was mentally ready when I came back to the line for relay number one. There was roughly a one hour gap from when I would finish shooting one match to when I would shoot my next match. I would repeat this process for all five record matches during each day.

The conditions at this year’s Nationals were pretty good, especially since Webster City is known to have some pretty challenging conditions. We started out shooting Hunter Class on Tuesday with the wind blowing from the 5 o’clock direction and gradually rotated to the 10 o’clock position throughout the day. I was only able to shoot the same wind direction twice, although the velocity was relatively consistent.

Wednesday was Hunter Class 200 yards with the same bench rotations. The wind had a more consistent direction, blowing mostly northwest through the whole day, but the velocity changed more. Shooters had to pay close attention to the pickups and let-offs.

Thursday, August 9 was the first day for the “big guns”. Varmint for Score (VFS) 100 yards was on the stage. In VFS, we shoot the same target as Hunter Class although we can have any power scope on our rifles, as compared to the maximum magnification of 6 on the Hunter Class Rifles. The VFS rifles can also weigh up to 13.5 lbs and have a 3-inch forend. Hunter class rifles can have a maximum weight of 10 lbs and 2 ¼ inch forend.

The conditions on Thursday were pretty close to those conditions we faced on Tuesday, light, rotating winds throughout the day. One very impressive shooter, Ray Perry from Texas, shot a 250-25X. Meaning he hit the 1/16” dot (commonly called an X) 25 times in a row. Very few 25 X’s have been shot in the history of the NBRSA.

Conditions on Friday for the VFS 200 yds were probably the most consistent of the week. I shot the same condition all day; wind coming from 8 o’clock with the tails doing a little dance – roughly 6-10 mph. I would simply adjust my hold slightly for the 10 mph compared to the 6, but tried to wait for a “middle” range velocity. However, it is very difficult to see a 4 mph change over 200 yards. This is where having a tuned gun really comes into play.

This year’s Nationals was a great time. The shooting was very competitive with many different winners at different yardages. The comradery was outstanding, with my favorite part going out to eat at a local restaurant on Thursday night with some really great shooters, but more importantly, great guys. Many thanks to all those involved in putting on such a great event.