Hello, everyone; Stanley here. This is a run-down on the 2018 rifle season buck I shot this year. Rifle season in Nebraska opened up on Saturday, November 10th, and went through Sunday, November 18th.

My personal goal was to get one of my twin daughters, Kennedy or Kamdyn, a shot at a buck this year. Both girls like to shoot targets but Kennedy likes hunting a little more than Kamdyn. Kamdyn would rather take pictures of animals. As long as we get to spend outdoor time together, I am fine with either choice. Sunrise on November 10th was at 7:06 AM and we can legally shoot 30 minutes before sunrise: 6:36 AM. Kennedy and I left the house around 5:30, took the fifteen minute drive to our hunting location, put on our scent free outer layers, and were in the “tree house” shortly after 6.

Our hunting location is a small 40-acre property in SE Nebraska that I bought a few years ago. It is essentially 40 acres of overgrown pasture ground. I took four acres, closest to the gravel road, and cleared many of the trees. I built a small, yet comfortable, cabin and also a rifle range where I do most of my load development and practice for Benchrest competitions. The rest of the 36 acres, I left in cedar trees, brome grass, and a few hardwood trees. I also have six small food plots scattered about in the 36 acres. The “tree house” is a totally enclosed, elevated blind that I built to get us out of the elements and offer a good rest for any shot opportunities.

Not a whole lot happened opening Saturday morning. We had several doe and a few small bucks, but nothing that Kennedy wanted to shoot. Saturday night was much of the same. However, a decent, two and a half year old, 4×4 (probably score in the low 120s) gave Kennedy a shot. She had her Rem Mod 7 chambered in .243 resting on the ledge with the Sightron S1 duplex scope right on the vitals, but said, “No, we will let him grow another year.”

The main reason Kennedy decided to pass on this buck is because she shot her first buck last year. It was a 4×4 that we had named Tyson after his episode with my decoy. Kennedy said she wanted something bigger than last year. Please note: I did not tell her to pass on this buck. She is fourteen years old and as long as she is legal and ethical, she can shoot whatever she wants. I was proud of her decision, but would have been just as proud if she would have “air mailed” the bullet. 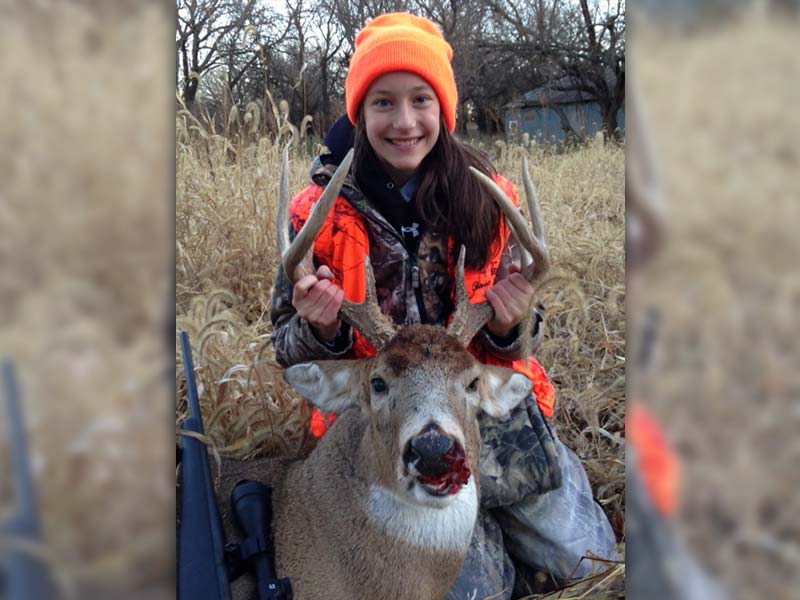 Sunday morning, Kennedy decided she would rather sleep than go hunting. Kamdyn also decided that sleep was more important, so I went to the tree house solo. Yep, you guessed it. “Too Tall”, a deer that we have many pictures of on camera, came out. “Too Tall” is a very tall, two and a half yr. old, 4×4. I did not shoot this buck, because even though his rack was definitely good enough, he was only two and a half years old. My standard is three and a half years old or older, unless I have not shot a deer in two years. Since I harvested a very nice buck last year, it is a three and a half year old or older for me for the next two years. That afternoon, I tried to explain to the girls that there is a really good chance “Too Tall” will come back out tonight. If we can get into the tree house without spooking anything, we might be able to harvest this buck. No deal. They simply did not want to go. I am not going to make either one of them go hunting. I make them do enough things. Hunting is going to be their choice. Sure enough, “Too Tall” came out around 4:10 and stuck around until almost 5. I got several good pictures and two videos of him chasing some doe around. It was a great night.

Due to work and athletic schedules, we were not able to hunt again until the following Saturday. Kennedy and I went out the second Saturday morning (November 17th). She again passed on a small 4×4. We took a short lunch break and came back to the tree house around 1:30 that afternoon. Once in the tree house, we opened up the windows and were in the process of putting our burlap blinds up when I noticed a huge buck roughly 200 yards away. He was not spooked and had no idea we were there. By the time Kennedy got set up, he was walking away. I told her, “It is only 1:30, he’ll be back.” I did not see the buck long enough to count his points, or anything like that. It was just one of those deer that you instantly know is big.

Around 3:30, another two and a half year old 5×5 came out. I gave Kennedy the green light, but again, she passed. She was hoping, with two hours of shooting light left, the big one we saw earlier would come back. It was not to be. We made the 500 yd. trek back up to the cabin.

That night, the whole family stayed at the cabin. We made homemade pizzas, lit a fire in the wood burning stove, played a few games, and went to bed. During the night, a cold front came through and quickly dumped about four inches of fresh snow on the ground.

The alarm went off at 5 AM; we got to sleep in a little while longer since we were already at the cabin. I got out of bed and took my scent free shower. I tried to wake the girls and neither one wanted to get out of bed. I explained this was the last day of the rifle season and we just got fresh snow. It is not going to get any better than this. I took them pulling the covers over their heads as a “No!”

I was in the tree house shortly after 6 AM. It was beautiful. The fresh white snow was lit up by the star light. There was zero wind, so the scenery was perfectly still. I could see there were already trails in the snow. The deer must have been up on their feet as soon as the snow stopped.

Shortly after 7 AM, I noticed movement out of the west window. A doe and its twins came out. I have seen these three every day of the season. As soon as they came out, they went back in. I turned my head to look out the east window. At that exact same moment, I saw a buck come trotting out roughly 100 yards away. He was not following a doe – just trotting. I paid attention to three things: round butt, straight line from neck to brisket, and big rack. Good enough for me. I grabbed the Macho (a Stiller action, Krieger barrel, chambered in 260 Remington with the neck blown forward .080” and a 30 degree shoulder angle sitting in a Bell and Carlson Stock with a Timney trigger).

As I was setting the rifle on the window ledge, I let out a deep grunt to stop the buck. My crosshairs of my Sightron were right where they needed to be and I sent the 120 gr. Sierra Pro Hunter on its’ way. I saw the buck leap straight in the air and do the mule kick. He landed and ran behind some trees. The whole event easily took less than five seconds.

I enjoy the excitement. I enjoy watching them come in from a long distance and having to control my nerves. I enjoy watching deer act the way they do in nature. That is fun. This happened so fast, that I did not get to enjoy any of that. However, ultimately, I am there to pull the trigger.

After about fifteen minutes, I walked to where I thought the buck was when I had shot. There were so many tracks; I had a hard time telling which one belonged to the buck. That is when I found this: I have blood trailed many deer. However, I have never had one quite like this one. There was never a “pool” of blood or big drops. It was like someone had sprayed red spray paint all over the snow and grass then nothing for ten feet or so, then another burst of red spray paint. This might have been one of my easiest tracking jobs ever: fresh snow with bright red bursts. I walked to the buck thirty-five yards away. I walked back up to the cabin to get Kamdyn (she is the one who likes to take the pictures). We took several pictures practicing with many different poses and camera positions; another teachable moment about lighting, angles and background. It was a good time. After a red-neck autopsy (field dressing), I realized why the “bursts” had happened. The 120 gr Sierra Pro-Hunter had taken out the top part of the buck’s heart. There was still enough of his heart to pump – but nowhere for the blood to go. After taking the buck around to some of my friends, I made the trip to Don’s Backwoods Taxidermy in Adams Nebraska. Don caped out the buck and kept the antlers. The buck’s left side had eight score-able points and the right side had seven. I did not get a chance to score the buck, but guessing he will score in the upper 150s.

My daughters and I still have muzzleloader tags, so there might be another deer story yet this year. Thank you for letting me share this story. I hope you enjoyed reading about it. Until next time, enjoy the experience.